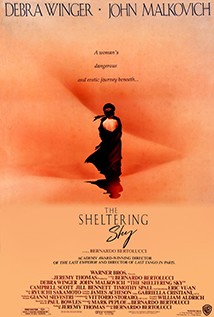 An American couple travel abroad to revitalize their relationship. But as the trip drags on, their attempt at recovering what they once had seems futile.

‘The Sheltering Sky’ is a filmed adaptation of the novel of the same name by Paul Bowles. Debra Winger and John Malkovich star as Kit and Port Moresby, a married American couple who globetrot to North Africa in the late 1940s with the hopes of re-sparking their love and adding some zest to their lacklustre lives. Along for the ride is the pair's friend George Tunner (Campbell Scott), who soon begins having an affair with Kit. As they struggle through the numbing heat of Africa amidst the sudden love triangle, each of the trio sees his and her beliefs and lives challenged. ‘The Sheltering Sky’ earned a Best Director nomination for Bertolucci at the 1991 Golden Globe Awards.