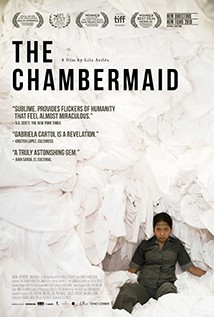 The labours of Eve, a young woman working at an upscale Mexico City hotel are meticulously detailed in this tightly-wound depiction of working-class life that mixes the surreal with the banal to quietly devastating effect.

A pointed exploration of the Mexican class divide, female solidarity and the indomitable power of the human spirit, it pays tribute to all people endlessly toiling away in low-paid and degrading work. Eve (Gabriela Cartol) is only 24-years old, but there is already a certain sense of weary resignation in her eyes. Therefore, she isn’t too surprised, in the film’s opening scene, when she stumbles upon a patron sleeping on the floor. Suddenly revealed after a long-held take of Eve cleaning up his room, the punchline-manner of his appearance is a bizarre intrusion into a documentary-like scene. This is emblematic of the film as a whole, which continuously balances elements of the strange with the prosaic, allowing both elements to co-exist within its central protagonist. (Subtitles)