ELLA FITZGERALD: JUST ONE OF THOSE THINGS 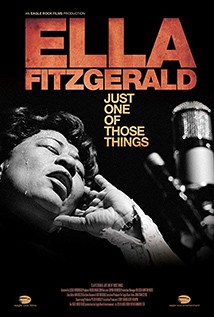 A beautifully constructed biographical documentary that reveals a fascinating portrait and some little-known aspects of her life.

Tracing the story of Ella Fitzgerald’s life, this documentary film explores how her music became a soundtrack for a tumultuous century. From a 1934 talent contest at the Apollo theatre in Harlem, the film follows Ella’s extraordinary journey across five decades as she reflects the passions and troubles of the times in her music and her life. Moving beyond conventional biopic, the film uses images and music to evoke the feel of those times so as to bring to life the context of Ella’s unique career, featuring various interviews. A central figure in Fitzgerald's life, Granz is rightly accorded significant space in Woodhead's film.  Biographer Judith Tick, author Margo Jefferson, singers Laura Mvula, Tony Bennet, Jamie Cullum, Patti Austin and Smokey Robinson, Fitzgerald's drummer Gregg Field, and her adopted son Ray Brown Jnr, are among those who, to varying degrees, shed light on Fitzgerald's life, times and art. But by far the best of these cameos is by former dancer Norma Miller - ninety-eight at time of filming - who reminisces about Fitzgerald's debut live performance, in Harlem in 1934, as a sixteen-year-old. Unmissable. Our thanks to Peter Worsley & Eagle Rock for this screening.