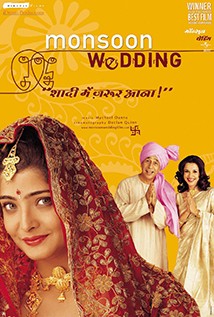 A stressed father, a bride-to-be with a secret, a smitten event planner, and relatives from around the world create much ado about the preparations for an arranged marriage in India.

Mira Nair's award-winning portrait of a contemporary India in which ancient tradition combines seamlessly with 21st century modernity. Set during the on-set of the monsoon season, the film follows the members of the Verma family as they prepare for the wedding of daughter Aditi (Vasundhara Das) to Hemant (Parvin Dabas), a family friend who now lives and works in Houston, Texas. As the hour of the ceremony approaches, Aditi makes a confession to Hemant which could endanger their plans. Mira Nair (born 15 October 1957) is an Indian-American filmmaker based in New York City.[1] Her production company, Mirabai Films, specializes in films for international audiences on Indian society, whether in the economic, social or cultural sphere At the start of her film-making career, Nair primarily made documentaries in which she explored Indian cultural tradition. In 1983 she made her first feature Salaam Bombay! (Subtitles)