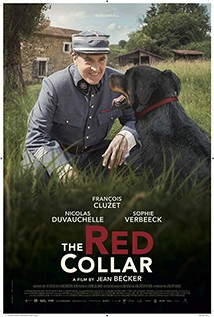 In a small town, crushed by the heat of summer, in 1919, a war hero was held prisoner in a deserted barracks.

In front of the door, his whipped dog barks day and night. Not far away, in the countryside, a young woman worn out by the work of the land, too educated to be a simple peasant, waits in hope. The judge who arrives to unravel this case is an aristocrat whose war has made his principles falter. Three characters and, in the middle of them, a dog, which holds the key to the drama. This WWI drama, adapted from the 2014 novel by Jean-Christophe Rufin, resolves around the interrogation of a decorated war hero who has fallen from grace after staging a strange, anti-war protest using his medal. Nicolas Duvauchelle plays the disgraced soldier opposite François Cluzet as a corrupt judge who is charged with the task of interrogating the young man. French-Belgian actress Sophie Verbeek plays the fallen hero’s lover. Beautifully directed by veteran Jacques Becker (‘Conversations with my Gardener’).