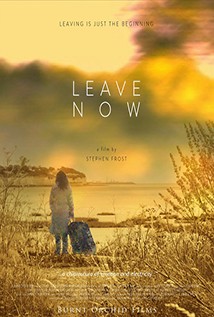 A grief-stricken woman, Rose Montefiore, revisits the seaside town where she first met her late husband. However, instead of finding the peace and quiet she seeks, Rose is disturbed by recurring problems with an electrical fault and has to call upon the services of local electrician, Titus, and his son, Robbie. When Rose saves Robbie's life after an accident, she finds herself caught up in the lives of those around her, past and present, who need her help. After she discovers a forgotten phonograph in the attic and listens to the distant voices recorded on an old wax cylinder, she begins to unlock a secret that lies deep within the house itself. Are the ghosts real, or all in the mind? And if so, whose mind? In ‘Leave Now’, two separate worlds pass through each other, like sunlight through mist, where love is lost and found, and holding on means letting go.