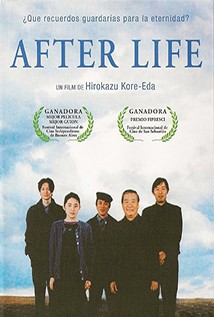 After death, people have just one week to choose only one memory to keep for eternity.

Like his previous drama ‘Maborosi’ (1995), Hirokazu Kore-eda's ‘After Life’ is a brilliant meditation on death and memory. The premise is simple: over the span of a week, twenty-two souls arrive at a way station (which looks like an old junior high school) between life and death, where they are asked to choose just one memory to take into the afterlife. The new arrivals include an elderly woman, a rebellious dropout, a teenage girl, and a 70-year-old war veteran. Once they have chosen a memory, it is recreated and filmed by the staff of the way station, using all the tricks and illusions of cinema. Kore-eda, with this film, the earlier 1997 masterpiece ‘Maborosi,’ and his most recent ‘Shoplifters’, has earned the right to be considered alongside Kurosawa, Bergman and other great humanists of the cinema. His films embrace the mystery of life and encourage us to think about why we are here, and what makes us truly happy. (Subtitles)