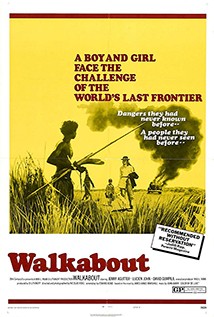 Two city-bred siblings are stranded in the Australian Outback, where they learn to survive with the aid of an Aboriginal boy on his "walkabout": a ritual separation from his tribe.

While out on a picnic in the Australian outback with his teenage daughter (Jenny Agutter) and young son (Lucien John), a man goes insane and kills himself. The girl takes her brother into the outback in order that he doesn't see their father's dead body. There they meet a young Aborigine (David Gumpilil) who is on walkabout - a rites of passage ritual whereby he must survive in the wilderness for several weeks. He finds food and water for the siblings and develops a form of communication with the young boy despite being unable to speak English. The girl, however, rebuffs the mating dance which the Aborigine performs in her honour. Roeg was a cinematographer before he became a director (he co-directed the Mick Jagger film ‘Performance’ in 1970 before this first solo outing. His camera here shows the creatures of the outback: lizards, scorpions, snakes, kangaroos, birds, and they are not photographed sentimentally - they make a living by eating other things. The movie is not the heart-warming story of how the girl and her brother are lost in the outback. It is about how all three are still lost at the end of the film, more lost than before, because now they are lost inside themselves instead of merely adrift in the world.