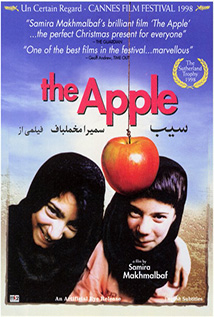 This beautiful Iranian film was directed by Samira Makhmalbaf, from the outstanding film family led by her father, who helped her get this film done when she was still a teenager.

One of the first films of the Iranian New Wave, ‘The Apple’ is the extraordinary debut of Samira Makhmalbaf, made when she was just seventeen. Based on a bizarre but engaging true story, the film tells the story of twin twelve-year-old sisters kept virtual prisoners all their lives by their parents, who fear that exposure to the sun will cause them to fade. Told with unaffected charm and natural humour. The use of oblique gestures deliberately suggests pointing up the way religion has become restrictive superstition, keeping half the population imprisoned (not just physically but mentally and spiritually). Given the difficult conditions of their work environment, this is only one of four films by this director - who by now should have blessed us with hundreds more in the same vein. Art can do more than politics! (Subtitles)
Iran 1998 Samira Makhmalbaf 86m