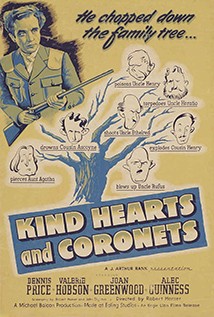 2019 marks the 70th anniversary of the original UK release of ‘Kind Hearts and Coronets’, the jewel in Ealing Studios' crown, and arguably one of the finest British films ever made, which is now released in a 4k digitally restored print.

Hailing from the golden-age of Ealing comedies (‘Passport to Pimlico’ and ‘Whisky Galore!’ also turn 70 this year), ‘Kind Hearts & Coronets’ stars Dennis Price as the debonair yet impoverished Louis Mazzini, the would-be Duke of Chalfont whose mother was disinherited by her noble family, the D'Ascoynes, for marrying beneath her. When her dying wish to be buried in the family crypt is refused, Louis vows to avenge his mother and work his way up the family tree, by engaging in the gentle art of murder. One by one he attempts to kill off the eight successors that stand in the way of his becoming Duke - all played by Alec Guinness in an unforgettable tour-de- force performance. Directed by Robert Hamer (who co-wrote the screenplay with John Dighton) the film also stars Joan Greenwood as the husky-voiced siren Sibella and Valerie Hobson as the refined and virtuous Edith D'Ascoyne, both of whom threaten to distract Louis from his murderous quest. Our thanks to StudioCanal for this screening.
UK 1949 Robert Hamer 106m