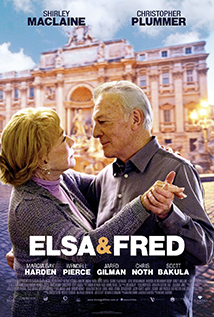 In our final film in this retrospective, Michael Radford returns to the theme of Italy in a charming and captivating love story about finding true love, starring Shirley MacLaine and Christopher Plummer.

‘Elsa and Fred’ (MacLaine and Plummer) is the story of two people who at the end of the road, discover that it's never too late to love and make dreams come true. Elsa has lived for the past 60 years dreaming of a moment that Fellini had already envisaged: the scene in 'La Dolce Vita' at the Fontana di Trevi. The same scene without Anita Ekberg in it, but with Elsa instead. Without Marcello Mastroianni but with that love that took so long to arrive. Fred has always been a good man who did everything he was supposed to do. After losing his wife, he feels disturbed and confused and his daughter decides that it would be best if he moves into a smaller apartment where he ends meeting Elsa. From that moment on, everything changes. Radford uses Luis Bacalov’s music again (‘Il Postino’) to sweet effect. A delightful, charming, warm, funny, sad, inspiring and lovable film! Good entertainment for anybody - Essential entertainment for anybody over 65!
USA/Canada 2014 Michael Radford 94m