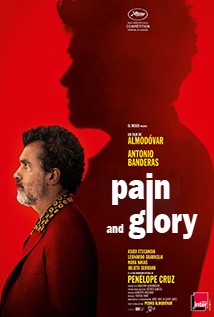 A film director reflects on the choices he's made in life as past and present come crashing down around him. Pedro Almodóvar’s eagerly awaited film was a highlight of Cannes, and comes to Chichester as a special Festival preview.

Director Salvador Malo (Antonio Banderas), a scruffy, haunted-looking guy with a stubbly beard, hasn’t shot a film in years. He suffers from a laundry list of ailments, all of them painful but none life-threatening. As the story unfolds, he is visited by memories from his childhood, often under the influence of one substance or another. Stepping up to the role as Almodóvar’s alter ego is none other than Antonio Banderas, who was given his first roles in the director’s early films before he upped and carved out a career in the US. Banderas gives a stunning performance, evoking the spirit of Almodóvar without any tendency to imitate him. At one stage he suggests “Without filming, my life is meaningless,” again giving a nod to Almodóvar’s own lurking fears at this point in his career. Although there are obvious echoes of Fellini’s ‘8 ½,’ here the tone is both bitter and sweet, and in contrast to the more flamboyant ethos of the early films this one is executed with simplicity and a restrained rigour. It has a universal message about how we come to terms with the approaching end of life and failing faculties as well as fears of the unknown. Also starring Penelope Cruz, another Almodóvar alumni. Not to be missed. (Subtitles)