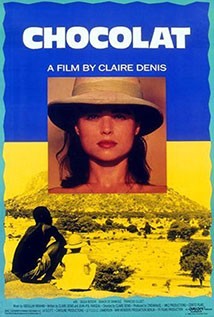 The international breakthrough of acclaimed filmmaker Claire Dennis, ‘Chocolat’ is set in a remote town in Cameroon during the last days of France’s African colonies.

There, lives a sole white family: Marc Dalens, the often-travelling regional administrator; his wife Aimee, who does her best to stave off frustration and boredom with household activities; and their young daughter France, who cultivates a special friendship with the native servant boy Protee. But the family’s ordered world is threatened with chaos when a plane full of strangers makes an emergency landing nearby, its arrival unleashing a torrent of simmering resentments, racism and repressed passions. Denis’s beautifully shot feature debut in 1988 is rooted in the director’s own childhood as a French colonial in west Africa, where her father was stationed. Her work has dealt with themes of colonial and post-colonial West Africa, as well as issues in modern France, and continues to influence European cinematic identity, and since this debut, she has made 13 films including her first English speaking film - the remarkable ‘High Life’. (Subtitles)