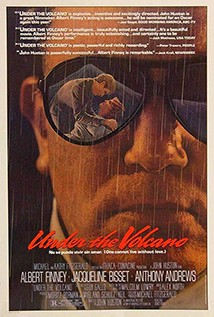 There will be few unmoved by Albert Finney's towering performance as the tragic alcoholic in John Huston’s undervalued film, set in Mexico.

Based on the novel by Malcolm Lowry and directed by John Huston,  Against a background of war breaking out in Europe and the Mexican fiesta Day of Death, we are taken through one day in the life of Geoffrey Firmin, a British consul living in alcoholic disrepair and obscurity in a small southern Mexican town in 1939. The Consul's self-destructive behaviour, perhaps a metaphor for a menaced civilization, is a source of perplexity and sadness to his nomadic, idealistic half-brother, Hugh, (Anthony Andrews) and his ex-wife, Yvonne, (Jacqueline Bisset) who has returned with hopes of healing Geoffrey and their broken marriage The setting is in Mexico, in and around a town at the foot of Popocatepetl (the volcano of the title) and the day is the Mexican holiday of the Day of the Dead.. No stranger to Mexico (where he had shot The Treasure of Sierra Madre), John Huston's Under the Volcano,  was shot on location in Cuernavaca city. A rare screening of an underrated classic, with a masterclass in acting by Finney.