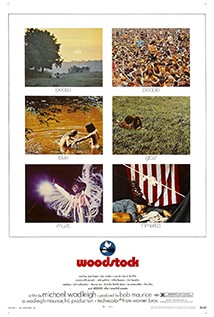 Celebrating the 50th anniversary of the three-day Woodstock music festival in 1969, which was the pivotal event of the 1960s peace movement, and this landmark concert film is the definitive record of that milestone of rock 'n' roll history.

It's more than a chronicle of the hippie movement, however, this is a film of genuine historical and social importance, capturing the spirit of America in transition, when the Vietnam War was at its peak and anti-war protest was fully expressed through the liberating music of the time. With a brilliant crew at his disposal (including a young editor named Martin Scorsese), director Michael Wadleigh worked with over 300 hours of footage. Then, of course, there is the music - a non-stop parade of rock 'n' roll from the greatest performers of the period, including Jimi Hendrix, Crosby, Stills, and Nash, Canned Heat, The Who, Richie Havens, Joan Baez, Ten Years After, Sly & The Family Stone, Santana, and many more. Watching this ambitious film, on the big screen, is the next best thing to being there – it is a time-travel journey to that once-in-a-lifetime event. Our thanks to Park Circus for this screening.