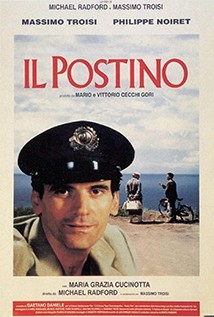 Michael Radford’s most celebrated film made in Italy in 1994, which became his biggest international success.

On a remote Mediterranean island young Mario Ruoppolo (Massimo Troisi) is hired to deliver letters to exiled love poet Pablo Neruda (Philippe Noiret). The two develop a close friendship, and Mario enlists the poet's help to win the heart of the beautiful Beatrice Russo (Maria Grazia Cucinotta). During the courtship, the poet in Mario emerges, and he realises he need not depend on Neruda. "The Postman" could have developed its friendship between poet and peasant more obviously. The beauty of the film is in its quietness” (Roger Erbert). A favourite film for many people, it was also one of 4 films that Alec Guinness  requested to be shown on his 2nd visit to New Park The film won many international film awards and one of the rare foreign-language films to be nominated for a Best Picture Academy Award. (Subtitles)

We are thrilled to welcome Michael Radford to Chichester to introduce his film, with a Q&A after the screening.

Please note that we have added a second screening of this film due to popular demand at 18:00 on Sun 25 Aug.