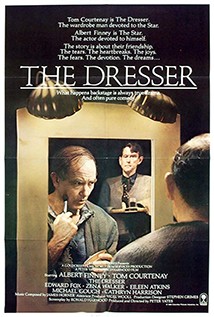 The lives and relationships of those within a British traditional touring stage company provide the backdrop for the five-time Oscar(r) nominee, including Best Actor for Albert.

The Dresser is a compelling study of the intense relationship between the leader of the company and his dresser. Sir (Albert Finney), a grandiloquent old man of the theater, has given his soul to his career, but his tyrannical rule over the companyis now beginning to crack under the strain of age and illness as he prepares for his two-hundred-twenty-seventh performance of King Lear. Sir's fastidious and fiercely dedicated dresser, Norman (Tom Courtenay), submits to Sir's frequently unreasonable demands, tends to his health and reminds him of what role he is currently playing. The two men are essential to each other's life. Based upon Ronald Harwood;s superb play, this is a film rich in comedy, compassion and love for theatre.