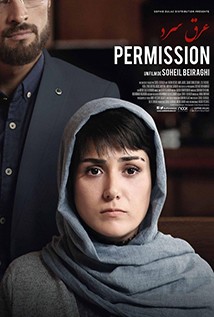 In this heatedly performed drama, a professional female soccer player finds herself stranded at home as her team takes off to Malaysia for the Asia Cup finals. The reason she’s left behind is due to a simple and completely lopsided facet of Iranian civil law: A woman needs permission from her husband in order to leave the country. If he says no, she’s stuck. In Beiraghi’s quietly gripping second feature, Afrooz (Baran Kosari), the captain of Iran’s national futsal squad, winds up being shut out of the big game by her bitter, about-to-be-former husband, Yaser (Amir Jadidi), who takes revenge on his wife’s emancipated ways by doing the only thing in his power to keep her around. Like many Iranian films of late, this one depicts a society plighted by inertia and helplessness, especially for women treated as less than equal by the law. Interestingly, the Iranian authorities have passed the film for a local release. (Subtitles)