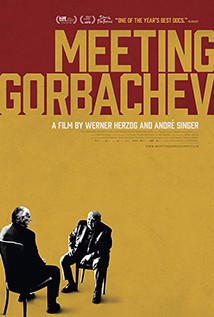 The life of Mikhail Gorbachev, the eighth and final President of the Soviet Union, in chronological order and in conversation with Werner Herzog.

Naturally, being his personal account of the part he played in such a volatile era, it is bound to be subjective. However, Herzog attempts to place Gorbachev's recollections in context, using some rarely seen archive footage in the process. The way Gorbachev was elevated to the top of the Soviet Union is seen here in almost comical terms, as his three predecessors - relics of the old Communist Party - are despatched in quick succession to their resting place at the foot of the Kremlin Wall. The real emotion comes towards the end when we learn about the final days of Mikhail's beloved - and much-admired - wife, Raisa. It's a truly fascinating look at a remarkable time in world history, and seeing again some of the heavyweight political players of the past only goes to emphasise the paucity of great leaders the world is suffering at the moment, and the poignancy of the film being released in the 30th anniversary year of the fall of the Berlin Wall. (Subtitles) UK/Germany 2018 Werner Herzog/André Singer 90m