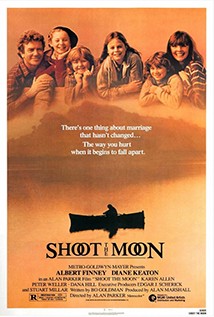 A 1982 American drama film directed by Alan Parker, and stars Albert Finney playing an American A fifteen-year marriage dissolves, leaving both the husband and wife, and their four children, devastated.

It also stars Diane Keaton, Karen Allen, Peter Weller and Dana Hill. Set in Marin County, California, the film follows George (Finney) and Faith Dunlap (Keaton), whose deteriorating marriage, separation and love affairs devastate their four children. This is a blistering, explosive, and unflinching film about a two stubborn people whose marriage is starting to unravel with great speed. Finney and Keaton are remarkable as George and Faith Dunlap. George has decided to leave his wife for a self-assured woman who's also married. Faith and George have 4 girls and the oldest girl deeply resents her father for walking out. Along the way, Faith begins a romantic relationship with a much younger Shoot the Moon  was deemed a box-office failure, having grossed only $9.2 million in North America. It later competed for the Palme d'Or at the 1982 Cannes Film Festival and received two Golden Globe Award nominations for Best Actor – Drama (Finney) and Best Actress – Drama (Keaton).