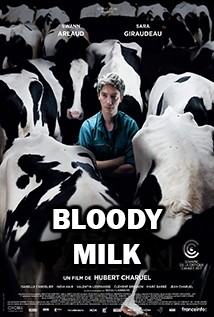 When one of his cows gets sick, a farmer will stop at nothing to save the rest of the herd.

‘Bloody Milk’ starts out innocently enough in its approach: a hardworking young farmer who still lives with his parents and is heavily invested in the well-being of his cows. Once there seems to be a spread of a disease that could threaten to have all of his cows put down, Pierre takes desperate measures to hide the evidence of the epidemic, plunging him even further down a path of no return. One would think that a film centred on the love a farmer has for his cows would not require much bloodshed, but ‘Bloody Milk’ incorporates elements of suspense in an otherwise ordinary setting. Pierre’s dilemma heightens to the point of no return, and even though there is a limited amount of gore shown, the level of tension still remains. Putting aside the more thrilling aspects of the film, it is obvious that Herbert Charuel has a personal connection with the way he directs the feature, even going as far as to film the main setting at his own family farm. ‘Bloody Milk’ doubles as both a labour of love and a crime of passion. With an unconventional premise that still delivers on high stakes tension, the film entertains through genuine heart. (Subtitles)