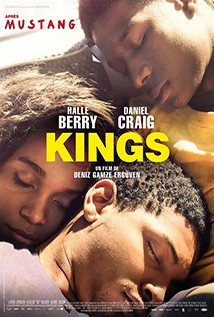 The life of a foster family in South Central Los Angeles, a few weeks before the city erupts in violence following the verdict of the Rodney King trial, starring Halle Berry and Daniel Craig.

‘Kings’ is a crime drama, with romantic undertones, written and directed by award-winning director Deniz Gamze Ergüven (2015's ‘Mustang’ which is also showing on Sat 24 Aug). Although the title is never really explained, the film is about a family of foster kids in South Central Los Angeles who struggle to deal with endemic racial discrimination - and to survive the L.A. riots following the 1992 Rodney King beating trial verdict. Oscar winner Halle Berry stars as Millie Dunbar, a foster mother who loves children and has a special place in her heart for troubled kids. She has a house full of them - boys and girls of different races and ages. She loves all of them as if they were her own and she works multiple jobs to take care of them. That last part means she's often away from home, and care for the younger ones often falls to her oldest, Jesse (Lamar Johnson). Jesse is intelligent and responsible, but he struggles against the instincts of his short-tempered best friend, William (Kaalan "KR" Walker), and a short-tempered neighbour, named Obie (Daniel Craig), who complains about Millie's parenting - and the noise coming from her house. The film uses a re-enactment of the fatal March 16, 1991 shooting of teenager Latasha Harlins by an L.A. Korean convenience store owner and news of the shooter's conviction, but subsequent sentence of probation, to set the stage for the events to come. Our thanks to StudioCanal for this screening.