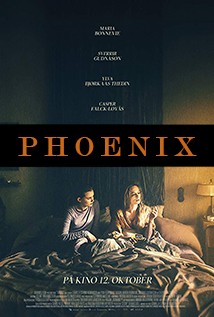 Deeply moving Norwegian film about Jill, a girl on the cusp of celebrating her 14th birthday, who has taken on the role of her family’s sole parental figure.

The family drama ‘Phoenix’, which recently played at the Reykjavik International Film Festival, is the debut film by Norwegian writer-director Camilla Strøm Henriksen. ‘Phoenix’ centres on the travails of a teenage girl, Jill (a mesmerising debut performance by Ylva Bjørkaas Thedin), in the week leading up to her 14th birthday. Contrary to the usual adolescent coming-of-age teen drama, this is a more sobering affair. Jill has been forced into early adulthood by the collapse of her parents’ marriage and the subsequent depression that has sent her mother Astrid (Maria Bonnevie) into torpor. Astrid, a once celebrated artist, now only gets out of bed to hit the bottle. The concern over her state of mind is serious enough that her well-meaning friend Ellen (Kjersti Sandal) has set up a job interview for Astrid, which only adds a further layer to the tension at home. In this haunting character study, Henriksen seamlessly moves the story from social drama, through fantasy elements, to grandiose lifestyles, depending on which character has authority over the scene. (subtitles)