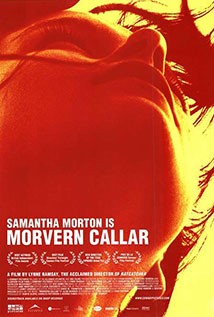 A dark and brooding Shirley Valentine tale, this was Lynne Ramsey’s 2nd feature film after the acclaimed Rat Catcher. Lynne Ramsay directs this adaptation of Alan Warner's novel set in a small Scottish town, with Samantha Morton in the title role. When Morvern comes home from her job at the supermarket one night to find her boyfriend dead in a pool of blood in their flat having committed suicide, she finds his finished novel on his computer and decides to pass it off as her own. Using the money that he left behind, she takes her best friend, Lana (Kathleen McDermott) on holiday to Ibiza - the beginning of a voyage of self-discovery for the detached, enigmatic Morvern. Ramsey’s films are marked by a fascination with children and young people and the recurring themes of grief, guilt, death, and its aftermath. They are low on dialogue and explicit story exposition, and instead use images, vivid details, music, and sound design to create their worlds.

Preceded by a talk on women film directors by Isabel Stevens, also in the Studio.