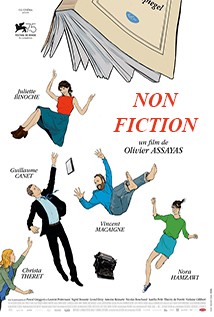 This is a transparently philosophical film, comprising a series of very French conversations among the Parisian set of characters. Alain (Guillaume Canet), who runs a prestigious, 100-year-old publishing house, is confronted with the necessity of making the transfer from print to digital. His concomitant existential crisis gives rise to many, many deliberations – mainly held at cafés and dinner parties, in pairs as well as groups – about the pros and cons of books versus e-books, criticism vs blogging, physical libraries vs Google Books, considered opinion vs Facebook likes. In depicting the figurative conflict between print and digital, Assayas accepts the supremacy of the latter and at the same time rejects a defeatist or apocalyptic outlook. But ‘Non-Fiction’ gets more playful as it goes along, revealing the infidelities and personality flaws of its characters. Shot in grainy 16mm, it is perhaps reminiscent of 1980s and ‘90s Woody Allen in its structure, dissection of relationships, and even a heady dose of self-examination. (Subtitles)