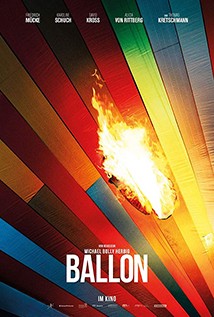 A German thriller that deals with the crossing from the GDR to West Germany of the Strelzyk and Wetzel families with a homemade hot-air balloon.

1979: Over 800 men, women and children lost their lives at the East/West German border, and branded traitors. Anyone trying to cross was met with barbed wire, landmines and spring-guns rigged to shoot if stumbled on. Anyone, that is, trying to do it on foot. “A cloth sack, put some hot air in it, and up we go. While I’m happy now that we took that decision, if I had the knowledge I have now I wouldn’t do it, because it was so dangerous, but I didn’t recognise that then,” said Günter Wetzel to mark this film’s release. Director Herbig has created an impressively realistic film, about an audacious escape attempt by two families living under the thumb of a repressive regime. (Subtitles)