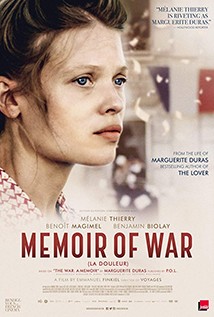 A powerful film, for its tense wartime emotions and exploration of inner life, with a devastating lead performance by Mélanie Thierry.

It's 1944, and Duras (Thierry) is an active Resistance member along with her husband, writer Robert Antelme (Emmanuel Bourdieu), and a band of fellow subversives in Nazi-occupied Paris. When Antelme is deported to Dachau by the Gestapo, she becomes friendly with French collaborator Rabier (Benoît Magimel) to gain information at considerable risk to her underground cell. But as the months wear on without news of her husband, she must begin the process of confronting the unimaginable. Through subtly expressionistic images and voiceover passages of Duras' writing, director Finkiel evokes the inner world of one of the 20th century's most revolutionary writers. (Subtitles)