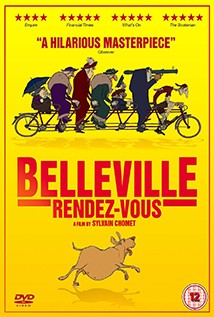 Following a short period by Ellen Cheshire as Cinema Manager, we were delighted to welcome Walter Francisco who arrived from Australia and Portugal in 2003. As the General Manager he dived enthusiastically into an extreme learning curve resulting in 100% success. His wining personality is a valuable asset to the cinema. I invited Walter to select one of his favourite films, and has chosen this wonderful animated feature. - Roger Gibson

It is the 1960s in France, and a young boy called Champion lives with his grandmother, Madame Souza, dreaming of winning the Tour de France. But before he competes he is kidnapped by the Mafia and taken to Belleville where his cycling skills are utilised. Madame Souza plans to rescue Champion with the help of 1930s jazz trio, The Triplets of Belleville and her trusty dog, Bruno As well as being one for older children and adults alike, this charming and delightful film is also an homage to the history of cinema and will keep the most hardened film buff entertained.