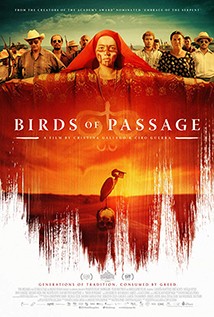 From the team behind the genre-defying ‘Embrace of the Serpent’, comes an equally audacious saga centred on the Wayúu indigenous people during a crucial period in recent Colombian history.

Torn between his desire to become a powerful man and his duty to uphold his culture's values, Rapayet (José Acosta) enters the drug trafficking business in the 1970s and finds quick success despite his tribe's matriarch Ursula's (Carmiña Martínez) disapproval. A sprawling epic about the erosion of tradition in pursuit of material wealth, ‘Birds of Passage’ is a visually striking (the glorious cinematography by David Gallego is something to behold) exploration of loyalty, greed, and the voracious nature of change. This compelling variation on the ‘narco’ crime-drama was Columbia’s 2019 submission for Best Foreign Film Oscar. (Subtitles)