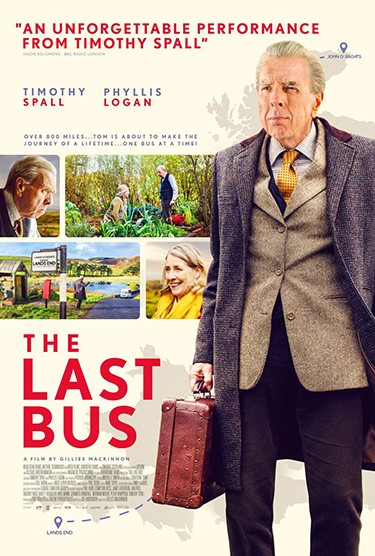 John O'Groats, Scotland: An elderly man, Tom (Timothy Spall), whose wife has just passed away uses only local buses on a nostalgic trip to carry her ashes all the way across the UK to Land's End, where they originally met.

This quirky drama about a widower's adventures on the local bus network opens in flashback in 1952, when an opaque tragedy sends a couple from the West Country to the far point of John O'Groats, where, decades later, we meet them in their quiet dotage. A foreshadowed event sets creaky, muttering Timothy Spall on a cross-Britain pilgrimage to Lands’ End utilising the free bus network that he can access with his travel pass. With his map of the UK, precious brown suitcase and habit of nodding off, he learns to rely on a string of kind-hearted strangers, from hen-night revellers to a Ukrainian wedding.